The battle against fraudsters

We are proud to announce that we have joined a group of UK mobile, banking, and finance companies to prevent fraudsters from sending scam text messages that attempt to exploit the COVID-19 crisis.

The collaboration, which also includes the National Cyber Security Centre (NCSC), is part of an ongoing industry initiative by the Mobile Ecosystem Forum, Mobile UK and UK Finance, to help identify and block fraudulent SMS messages and protect legitimate businesses and organisations.

Text messaging scams that trick consumers into sending money or sharing their account details with fraudsters are known as 'Smishing' (or phishing by SMS). Criminals send bogus texts which appear to come from a trusted sender, for example, in the case of the Government's mass-text campaign UK_Gov.

These messages often contain links to fake websites or phone numbers using sophisticated social engineering techniques to trick the victim into revealing their personal and financial information or sending money. Criminals will also often use a technique called "spoofing", which can make a message appear in a chain of texts alongside previous genuine messages from that organisation.

As part of the cross-stakeholder trial, MEF has developed the SMS SenderID Protection Registry which allows organisations to register and protect the message headers used when sending text messages to their customers. The Registry limits the ability of fraudsters to send messages impersonating a brand by checking whether the sender is the genuine registered party.

50 bank and Government brands are currently being protected through the trial with 172 trusted SenderIDs registered to date. Over 400 unauthorised variants are being blocked on an ever-growing blacklist, including 70 senderIDs relating to the Government's Coronavirus campaign. 14 banks and Government agencies including HMRC and DVLA are participating in the ongoing trial which is supported by BT/EE, O2, Three, and Vodafone.

In the last six months, the group has seen a significant drop in fraudulent messages being sent to the UK consumers of the participating merchants. 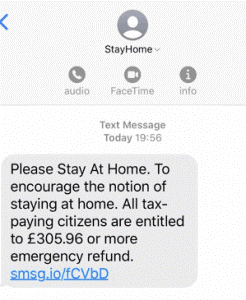 You can find the original article, with quotes from industry leaders, on the Mobile Ecosystem Forum.

Hi, I'm Andrew, UK Sales Manager at Reach Interactive. I have a background in sales and I love building relationships with my customers and helping them to grow through the use of digital technology.

CONNECT WITH ANDREW ON LINKEDIN

Hi, I'm Andrew, UK Sales Manager at Reach Interactive. I have a background in sales and I love building relationships with my customers and helping them to grow through the use of digital technology.

CONNECT WITH ANDREW ON LINKEDIN

Why Use SMS Marketing?

How to write the perfect SMS offer

Local Business? Here's why SMS marketing is perfect for you

13 Ready to use text marketing templates

How much does it cost?

We care, that's why we clean your data and make sure your campaign is running right.

Ready To Get Started?

Try your hand at SMS marketing with no investment, no outlay and no commitment.

For anyone thinking about using SMS marketing, we’d say go for it!

READ HOW MIND USE REACH

Have a question? Talk to Team Reach

FIND OUT ABOUT OUR CHARITY PROGRAMME

©2002-2022 All rights Reserved. Reach Interactive© is a registered trademark of Reach-Data Ltd is registered in the UK and Wales. Registration Number: 04602161. Privacy Policy Terms and Conditions